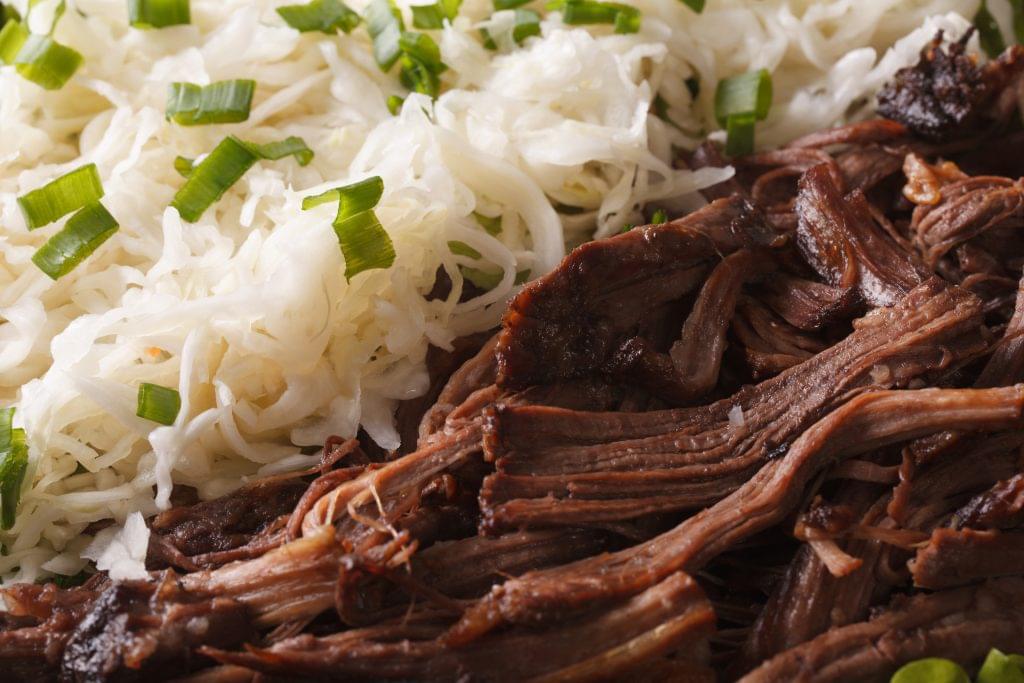 A true Southern classic, pulled pork is one of the easiest dishes to prepare in a slow cooker while you're at work. Served with a light cabbage slaw, this recipe can be eaten as is or with homemade Barbecue Sauce. Enjoy this delicious pork and slaw with a fork or pair with a low-carb bun for a treat. If you do not have a slow cooker, cook the pork in a Dutch oven in a 200°F oven for the same amount of time.

FOR THE SLAW: ¾ cup shredded cabbage

FOR THE RUB: 4 tablespoons stevia, or other sugar substitute

Step 1TO MAKE THE SLAW: In a large bowl, combine the cabbage, carrots, scallions, mayonnaise, mustard, salt, and pepper. Mix thoroughly. Refrigerate until ready to serve.

Step 3TO MAKE THE PORK: Cover the pork shoulder with the rub, massaging it thoroughly into the meat.

Step 4In a large skillet over medium-high heat, heat the olive oil for 1 minute. Add the pork to the skillet, browning on all sides for about 3 minutes per side. Once browned, remove the pork from the skillet and set aside.

Step 5Pour the beer into the skillet and scrape the bottom of the pan to loosen any browned bits. Remove the skillet from the heat and pour the drippings into a large slow cooker.

Step 6To the slow cooker, add the apple cider vinegar and potato paste. Whisk to combine with the pork drippings.

Step 7Place the pork in the slow cooker and spoon some of the liquid over it. Cover. Cook on low for 8 hours. Insert a meat thermometer into the center of the pork to check the internal temperature. It should be between 180°F and 200°F.

Step 8Remove the pork from the slow cooker and place it in a large bowl to cool.

Step 9In a large skillet over high heat, add the remaining liquid from the slow cooker and bring to a boil. Lower the heat to medium-low and reduce the liquid by at least half over the next 10 minutes.

Step 10Using two forks, shred the cooled pork until you have bite-size chunks.

Step 11Pour the reduced liquid over the meat. Mix until it is coated evenly.

Step 12Serve the shredded pork with the slaw on its own, or on a low-carb bun or a lettuce wrap (if using).

Nutrition Facts (per serving of 3:1)